TO JESUS THROUGH MARY

We are a Roman Catholic lay apostolate within the Archdiocese of Baltimore and founded almost 50 years ago by a local family. We are faithful to the Magisterium and joyfully, unapologetically Catholic, seeking to spread devotion to Our Lord Jesus Christ through the intercession of the Blessed Virgin Mary. We are an independent 501(3)c non-profit and rely completely on the support of our patrons.

Our Lady’s Center was founded by Frank R. Lancelotta Sr. and his wife Josephine on May 13th, 1974, the Feast Day of Our Lady of Fatima, during a time when devotion to the Blessed Mother was falling away. Our Lady’s Center became a beacon of the Blessed Mother’s love and constant presence for her devoted children.The roots of this amazing place, however, reach far back and across the ocean. Learn more about our incredible founding and the challenges we have faced and overcome in this nearly half a century of history:

Bring the children twice a month on Wednesday mornings at 10:30 am to hear Mrs. Ginny read one of the wonderful faith-filled children’s storybooks that we feature in the bookstore. Help them foster a love of reading, an appreciation of the faith, and the joy of being a part of a safe, friendly faith community especially devoted to spreading a mother’s love, Jesus’ mother, Mary. While the children are making friends, their parents do too.
Every storytime also features a fun craft to bring home and a snack. We appreciate RSVP’s so we know how many crafts and snacks to have on hand, but walk-ins are always welcome. Contact us to sign up for the email reminders. Dates are always listed in the monthly Newsletter.

Blanket Making Workshops are held on the 2nd and 4th Tuesdays of the month at 1 pm in the Conference room. Come in and learn from our Blanketeers how to make simple, no-sew fleece blankets for area children in crisis. Once finished, they are brought up to the chapel on Blanket Blessing Day, when they are laid across the front pews during Mass. After Mass, they are blessed, sprinkled with Holy Water, and prepared to be brought to area hospitals and shelters to help bring the warmth of Christ’s love to the suffering. Drop ins are welcome, and a good time is had by all. If you can tie a knot, you can make a blanket. Over 500 blankets have already been made at OLC Blanketeers.

We host a number of speakers throughout the year. The Defend Life Speaker Series brings the leading voices in the cause of Life to our little shrine six times a year to speak on relevant topics in the pro-life movement. We also host talks and book signings by well-known regional authors and speakers in the Catholic faith.

The Legion of Mary, Our Lady Undoer of Knots Praesideum, meets here at OLC on Friday evenings at 5:30 pm. Along with carrying out their myriad devotions and responsibilities, the women of the LOM also provide much needed volunteer help here at OLC, and we are very grateful to have them.

With only one full time and several part time employees, Our Lady’s Center simply could not continue to exist without the efforts and enthusiasm of our wonderful volunteers. We are so grateful for their help, and are always ready to welcome anyone willing to serve the Blessed Mother.

Our Annual Spring Clean up is an opportunity for any and all volunteers to come together to spruce up the grounds after a long harsh winter. From clearing dead wood, trimming back the overgrowth and power washing the siding to giving the chapel a deep cleaning and polishing, there is a job for everyone. We always follow it up with a potluck with plenty of food for hearty appetites.

A dedicated group committed to keeping the grounds tidy and accessible no matter what the season, clearing downed limbs and debris, weeding, trimming, shoveling, hauling, directing parking and setting up for occasional outdoor events.

From altar linen laundering to window washing to pew polishing, our Chapel Crew makes sure our pretty little place of worship is always ready for Mass. Some tasks, such as wax removal from brass candlesticks and tabernacle polishing are often part of Annual Spring Clean Up. Others, like

A large part of our sales revenue comes from vending our religious articles at area parishes and conferences. Our staff relies on the assistance of a pool of volunteers who help to pack up our merchandise, haul them to show sites, set up displays and even assist with sales. After the show, they pack us up and help haul our items back to the center to restock. These shows are wonderful opportunities to connect with our broader Catholic community and let them know all about OLC.

Many looming, seemingly costly improvements have been wonderfully accomplished by ambitious young men looking to earn Eagle Scout. The projects that have earned them this recognition include a new shed to replace the one lost in the flood, new laminate flooring, a nice picnic area, shoring up the hill behind our outdoor grotto, and a lovely Stations of the Cross that follows the meandering stream. We are always looking forward to providing another Eagle Scout project opportunity. 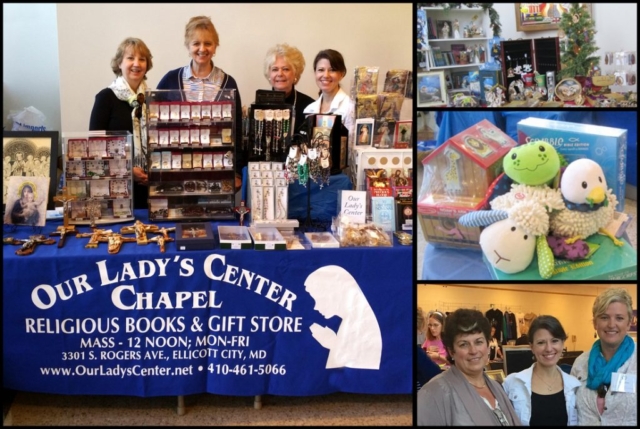 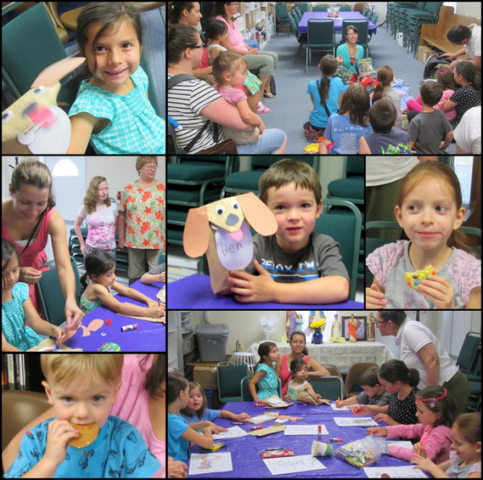 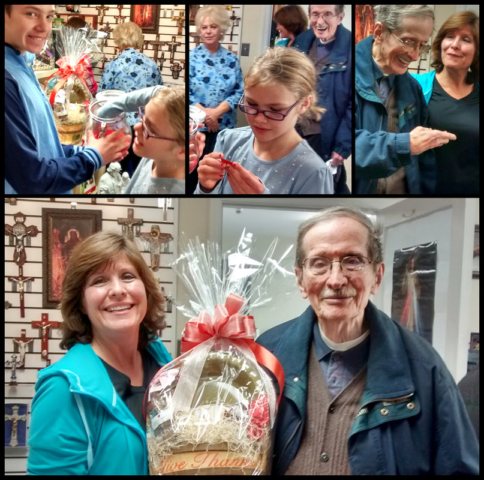 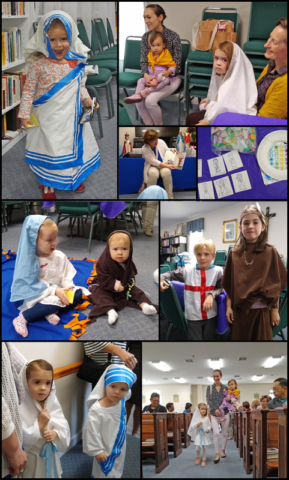 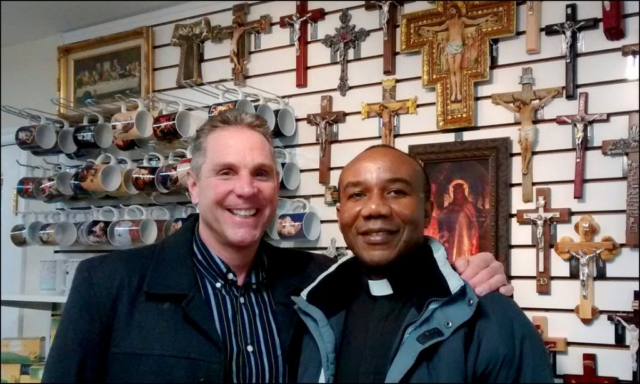 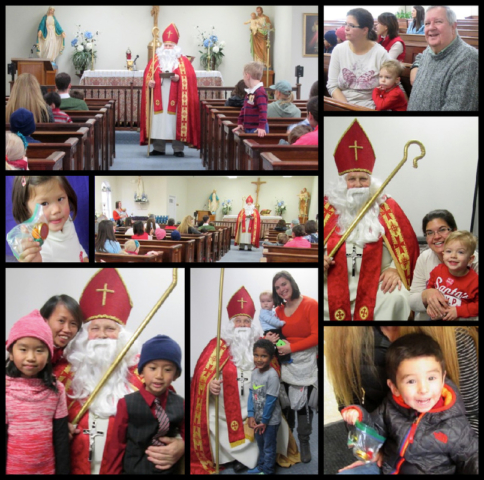 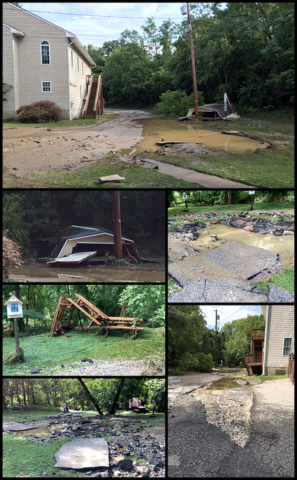 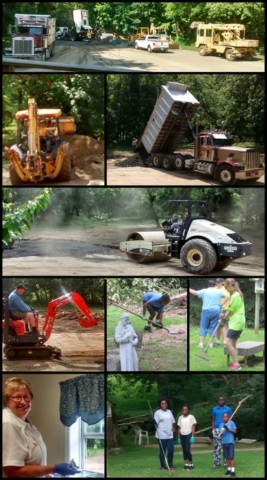 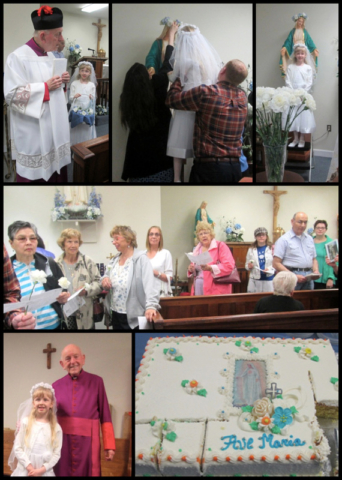 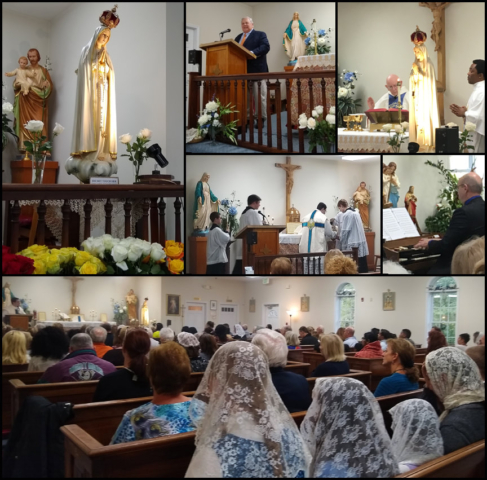 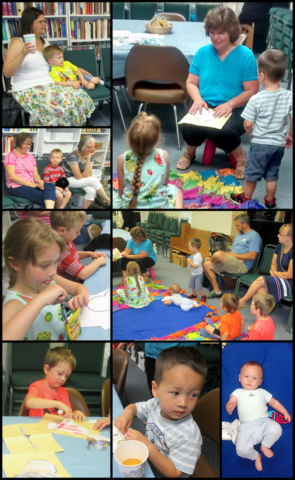